Croquet Sports Betting: A Closer Look at the Rules and How to Bet on Croquet

While croquet is a game that is played all over the world, it is a game that is quintessentially British. A cucumber sandwich, a glass of Pimm’s, and a game of croquet on a sunny day in Britain, what is not to like? In the following article, we are going to take a look at how croquet is played, the best croquet players, and how you can bet on it. So, without further ado, let’s get cracking. 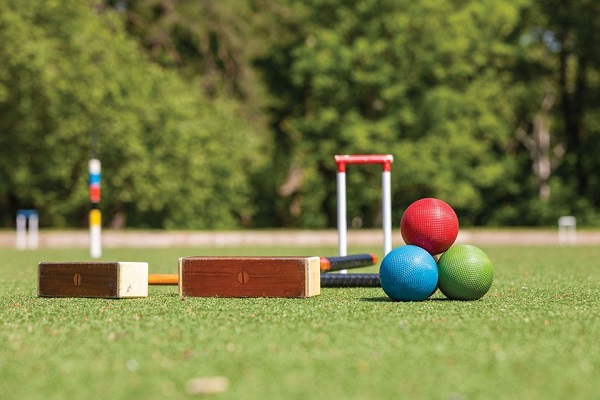 How Association Croquet is Played

The first rules of croquet were established in 1856, although there is a belief that similar types of games were being played as way back as the 1600s. There are plenty of different croquet variants, but in its simplest form they all involve hitting a ball across a lawn through hoops with a wooden mallet. We are going to give you the official rules according to the World Croquet Federation.

The aim of this entertaining game is to move you balls across the lawn and through six hoops in the correct order and then hit the central peg to win. This game can be played as single or doubles, with the rules being the same for either version. One side will use a black ball and a blue ball, while the other team will use a yellow ball and a red one. In addition to the balls, each player uses a wooden mallet to hit the balls. The lawn will usually be 17.5 x 14m, but for casual players any decent sized flat grass area will do.

The hoops that the balls have to be put through are 12 inches in height and 3 1⁄4 inches in width, which is only slightly wider than the balls themselves. The hoops, or wickets, are set out with three at either end of the lawn, with a peg situated in the centre. The winner is the team that completes the six-hoop circuit twice with both balls and then hits the centre peg, making a total of 13 points per ball. In other words, the team or player that gets to 26 points first will win the game.

One side will use blue and black balls, while the other will use yellow and red. Players can choose either ball to play with when it is their turn. If a player hits their ball through the correct hoop during their turn or hits one of the other balls in play, known as a roquet, their turn carries on. During a roquet, the player picks their ball up and puts it next to the ball that they hit, and they take their next shot with both balls touching. This is called a croquet stroke, which is where the game gets its name from.

Once they have played their croquet stroke, they have a continuation stroke where they can try to get the ball through a hoop or make another roquet. A ball can only be roqueted once in a turn unless a hoop is run - then it becomes eligible to be roqueted again. The best croquet players have the ability to complete the circuit in just one turn. A player’s turn is up if they hit the ball and it does not go through a hoop or hit another ball.

Golf Croquet - A Variant of Croquet

Golf croquet is quickly becoming one of the most popular variants of this sport thanks to the fact that it is simple to play and very competitive. To add to this, it is much faster than the original game, meaning that many find it a lot more entertaining to play.

In this variant of the sport, each player takes a turn to try and hit a ball through a hoop, and unlike in association croquet, a player or team does not get an extra hit for hitting other balls. Blue, red, black, and yellow is the sequence of play, with the black and blue balls playing against the yellow and red ones. When a team or player wins a hoop, the sequence continues as before. The winner is simply the player or team that manages to win more hoops.

There are many talented croquet players out there, but just like with every other sport, there are some that are much better than others. So, who are the best association croquet players at this moment in time? Well, below we have listed the top 10 for you as of December 2020:

So, if you have just gotten into croquet and want to learn from the very best, we recommend that you spend some time watching some of the above players play.

There are a number of different croquet tournaments that the best players in the world take part in, but the one that every professional croquet player wants to win is the World Championships that the World Croquet Federation organises. This competition takes place every two to three years, with the last one having been played in Melbourne, Australia, in 2020. This tournament was won by Reg Bamford, which was the fifth time that he won this prestigious event. The 2020 Women’s World Championships was won by Miranda Chapman.

There is also a Golf Croquet World Championship, with the first one taking place in 2013 in Cairo, Egypt. This inaugural event was won by Reg Bamford, making him the first croquet player to hold the association and golf croquet titles. He is not the current holder of the title though as the 2020 edition was won by Ben Rothman, while the women’s version was won by Soha Mostafa.

Another big croquet competition is the MacRobertson Shield tournament, which is a major international competition that is contested every 3-4 years between England, Australia, New Zealand, and the United States. The Brits have been the dominant force in the MacRobertson International Croquet Shield, having won the trophy no fewer than 14 times out of the 22 times that the competition has taken place.

If you start playing croquet and get right into it, then we highly recommend that you watch these two tournaments whenever they are being played as they are highly entertaining. To add to this, you can learn an awful lot when watching the best croquet players in the world go up against each other. High levels of entertainment and a croquet education, what is not to like about that?

Croquet, as you have probably guessed, is a bit of a niche sport. If you were to walk down your local street in Wales and ask 100 people if they like croquet, you might find a handful that tell you yes. Thus, if we were to ask you whether you would be able to find croquet betting markets at sports betting sites, you would probably be quick to tell us no. However, you would be wrong to do so as, although it is a very niche sport, more and more sports betting sites offer croquet betting markets when the big tournaments are taking place.

Match winner: You can put your money on a player or team winning the match that they are taking part in. This is a simple type of bet to understand since if your player wins, you make a profit and if they lose, you lose your stake.

Tournament winner: When there is a big tournament on, such as the two that we just mentioned above, you can bet on who you think will go on to lift the trophy at the end. Once again, this is not a hard bet for you to get right – if your team lifts the trophy after winning the final, you make a profit. If your team fails to lift the trophy, you lose your stake.

Total number of points scored: In association croquet, the first player or team to reach 26 points wins the match. Some sports betting sites will give you a total points tally such as 35.5 and then you have to decide whether there will be 36 or more points in the match or 35 or fewer points.

How to Find the Best Sports Betting Sites for Croquet

When it comes to croquet betting, how do you find the best betting sites for croquet? Well, there are plenty of great comparison sites out there that will help you find croquet betting sites, and if you follow the link that we just provided, then you will be taken to one of the best comparison sites around at the moment. Here you will be able to find in-depth reviews for all of the best sports betting sites available to UK punters and it is only the best bookies that will offer croquet markets since it is such a niche sport.